Get to know author Gene Stiles 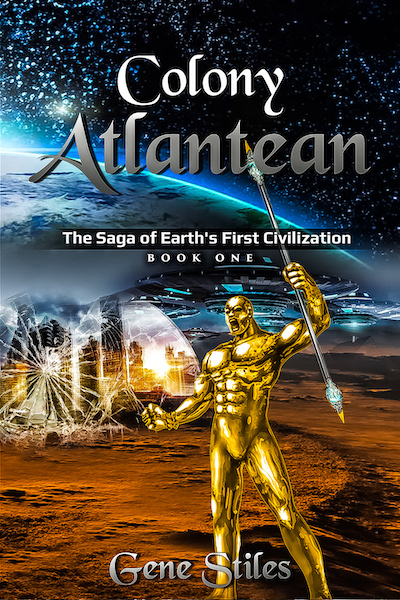 International author, Gene Stiles, a Michigan native, moved to Simi Valley, CA in 1963. His first publication was at age eleven when the Los Angeles Daily News (then the Valley News and Green Sheet) and the L.A. Times both wrote articles on a young poet selling his work to buy a Mother’s Day present.

An avid researcher, his interests include mythology, world religions, archaeology, geology, palaeontology, lost civilizations, science fiction and the 2012 phenomenon which are the basis for his Colony Series of novels, Colony – Atlantean, Colony – Neander, Colony – Bloodkin, Colony – Seeds of War, Colony – Nephilim and the upcoming Colony – Olympian.

Growing up an outcast in his family, he lived much of the story in his first novel, To Walk the Winding Road – A Story Of Abuse And Survival.

At age seventeen, he started a three-state wide non-profit organization called Teens, Inc in the hopes of helping other troubled teens like himself. As an adult, he continued his devotion to kids by opening teen-oriented businesses including two arcades and three teen nightclubs – which are the sources for his book Phenomenon – The Xenon West Story.

He is also a martial artist and major karaoke junkie.

He lives in Missouri on the land he and his late wife, Dianne, cleared together and in the house the two built alone and with their own two hands. She promoted him, believed in him and without whose inspiration none of his books would ever have been printed.

Ramona: How long on average does it take you to write a book?

Gene Stiles: Hi, Ramona. Thank you for chatting with me. On average, it takes me between eight months to a year to finish a novel.  Each progressive novel in the ‘Colony Series’ of books take longer. Now that I am retired, I spend each morning writing for at least four hours, however, there is an incredible amount of detail that goes into them. They are what I term ‘Historical Science Fiction’ which means I have to be accurate on everything from climate, fauna, foliage and culture of a given time period to foods and clothing. Since the novels are set over a huge span of time, it can be daunting.

Ramona: You have written seven books. What is your latest one that you are working on?

Gene Stiles: I am currently writing ‘Colony – Olympian’, Book 6 in the ‘Colony Series’. It tells the tale of the ‘Second War of the Gods’ between the Olympians led by Zeus and his father, Cronus, leader of the Twelve Titans. More than that, it contains the story of the Earth’s first nuclear war backed by hard scientific proof, mythological references and religious texts. ‘Colony – Olympian’ shows the causes, where, when and the consequences to the planet and the destruction of the first highly technological society on earth. Though the Greek Gods are the primary characters, Egyptian gods are also a big part of the story with gods of other mythologies tossed in.

Ramona: Can you name all your books one by one

Gene Stiles: My first novel was called ‘To Walk the Winding Road – A Story of Abuse and Survival’. It is biographical fiction based on my own troubled childhood and is about 80% true and was very difficult to write.

My second novel is called ‘Phenomenon – The Xenon West Story’ and is also biographical fiction based on the three Teen Nightclubs I built and owned in Southern California in the 80s. It was a 2 year, very public battle to open them and the fight was covered by most of the major news agencies in the area. The astounding thing was the incredible young people that both worked for me and were my patrons. Even more humbling to me is the fact that I found out a few years ago that there were MySpace pages about the clubs and are currently Facebook pages dedicated to them. Hundreds of my previous employees and the kids who came there have reunions regularly. I was honoured to go to the 30 year reunion of my little clubs. I never imagined they would have a lifetime effect on so many people.

‘Brotherhood of the Bike’ came next. I have been a motorcycle rider most of my life. I asked other riders around the country for their stories and input and I compiled their road trips, riding challenges, advice and funny or scary experiences into a manual of sorts for new riders.

My remaining novels are all part of ‘The Colony Series – The Saga of Earth’s First Civilization’. In order, they are:

Ramona: Is there anything you find particularly challenging in your writing?

Gene Stiles: Yes. Keeping the story accurate as well as entertaining and thought-provoking. Most of the details in the ‘Colony Series’ can be looked up so I must make sure I’m correct. With the time span I deal with, I must be up to date on recent scientific discoveries, particularly in archaeology.

Ramona: What is the most difficult part of your artistic process?

Gene Stiles: Overcoming self-doubt and maintaining motivation no matter what sales figures or others say. Four years ago, I lost my beloved wife. She was my other half, sounding board for my writing and my primary motivator. Without her belief in me and her pushing, I would never have published my first book. Losing her almost ended my writing career. It was two years before I returned to my work. One day, I heard her voice sweetly yelling at me to finish the series as I promised her I would. I’ve completed three novels since then.

Ramona: What kind of research do you do, and how long do you spend researching before beginning a book?

Gene Stiles: ‘The Colony Series’ is based on 50+ years of ongoing research in hard sciences, world myths and religions, history and lost civilizations. Even research into UFOs comes into play. In my studies, I saw the millions of connections between these things and combined them into the theory that is the foundation of the books. As I start each novel, I refresh my memory on the different aspects that pertain to that particular novel and check for any new discoveries.

Ramona: What does literary success look like to you?

Gene Stiles: Though a greater audience and financial success is always a goal, I believe I have already achieved literary success. Not only have I published seven novels so far, but I have sold books all over the world. Knowing people in the U.S. and in other countries are enjoying something I wrote is an incredible feeling. That is success to me.

Ramona: What advice would you like to give to aspiring authors?

Gene Stiles: Never quit. Write as often as possible. Believe in yourself, but always work to improve your craft. Be open to constructive criticism no matter how it can sting. Learn from others and from what they have to say good or bad. We learn more from our mistakes than we do from our successes.

Get in touch with Gene Stiles on:-

Any cookies that may not be particularly necessary for the website to function and is used specifically to collect user personal data via analytics, ads, other embedded contents are termed as non-necessary cookies. It is mandatory to procure user consent prior to running these cookies on your website.